Elisabeth Lund Engebretsen, a senior lecturer at the STK, has contributed a chapter in the recently published volume Transforming patriarchy: Chinese families in the 21st century on University of Washington Press. 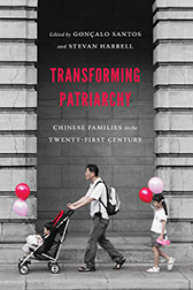 Transforming patriarchy explores the private and public dimensions of changes in patriarchy in present-day China. Each successive wave of revolution to hit modern China-political, cultural, and economic-has radically reshaped Chinese society. Whereas patriarchy defined the familial social structure for thousands of years, changing realities in the last hundred years have altered and even reversed long-held expectations. Patriarchy is not dead, but it is no longer the default arrangement for Chinese families: Daughters-in-law openly berate their fathers-in-law. Companies sell filial-piety insurance. Many couples live together before marriage, and in some parts of rural China almost all brides are pregnant.

In her chapter “Under pressure: Gay-lesbian contract marriage and their patriarchal bargains” Engebretsen explores how and why some gays and lesbians in urban areas engage in contractual marriages (xingshi hunyin) to each other, as a tactics against the omnipresent pressure to marry heterosexually and fulfill gendered norms for morally appropriate adult lives. In principle, these marriages seek to resolve the intense marriage pressure by faking it – indeed, for this reason it is often called ‘fake marriage’ or jiahun. In recent years, the growing desire for contract marriages have spurred a considerable online and offline matchmaking industry within China’s lesbian and gay, or LGBT, communities. But does it work?

Engebretsen presents ethnographic data gathered over a long period of time, as well as media-related materials, to suggest that the contract marriage strategy actually reproduces difficult inequalities and creates new problems in people’s ‘married’ lives. Keeping up appearances, confronting sustained patriarchal gender norms in daily and family life, fending off the inevitable question of having a child, and still having energy to conduct ‘real’ same-sex romantic relationships, are found to pose considerable challenges to the long-term strategic success of contract marriage. Still, the new discursive space and practice of such marital strategies offer imaginative resources of hope and concrete bargaining power for many, and thus are found to challenge hetero-patriarchal ideals in contemporary Chinese society.

Transforming patriarchy: Chinese families in the 21st century on University of Washington Press

The book is the result of the conversations held and papers presented at a 2013 international workshop at the Max Planck Institute for Social Anthropology in Halle, Germany.