Seminar: Launch of the report on diversity at UiO

Beret Bråten and Maja Feng Mikalsen (STK) have carried out a research project on barriers to diversity and inclusion among staff at the University of Oslo (UiO). This resulted in the report Diversity and Inclusion at UiO, which was published in May. On August 22, the report was launched with an open seminar. 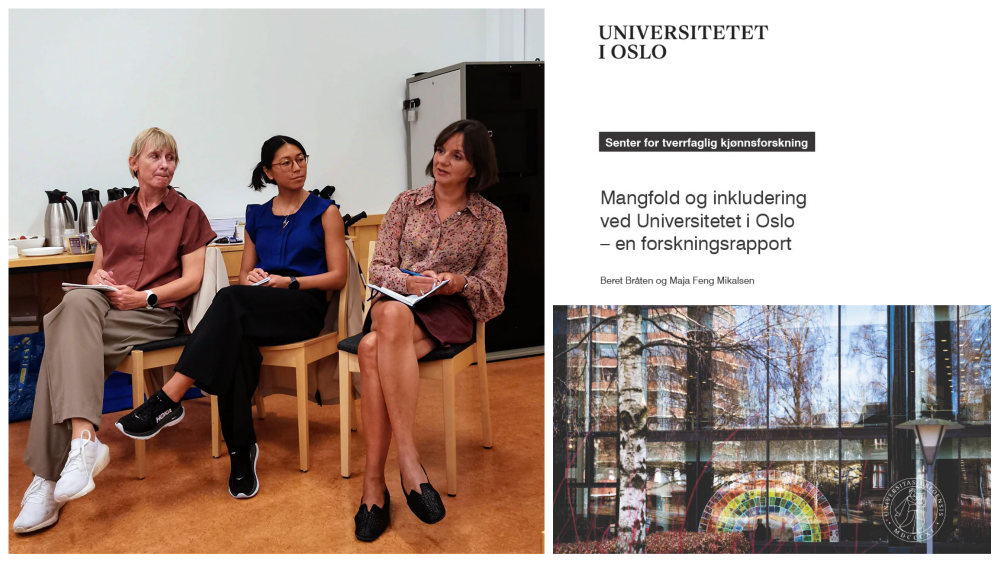 A few months after the report Diversity and Inclusion at UiO was published, the researchers behind the report, as well as interested parties, both at UiO and beyond, have had time to digest its findings. In a seminar room at the University Library, many had gathered to hear more about the report’s conclusions, and to discuss how to  make UiO a more diverse and inclusive place to work.

After a short welcome from Inger Skjelsbæk, director at the Centre for Gender Studies, Pro-Rector at UiO Åse Gornitzka gave the first talk of the day. On behalf of the leadership at UiO, Gornitzka explained why the university had requested that the research project be carried out. She pointed amongst other things to the sharp rise in the number of people in Norway taking higher education, which in turn has made diversity a more pressing concern.

This was followed by a presentation of the report’s findings by Bråten and Mikalsen. The first part of the project was an analysis of UiO action plans for gender equality, later gender equality and diversity, from 1989 onwards, as well as a review of existing research on diversity and inclusion within academia in Norway. The second part of the project focused on the experiences of employees at UiO. A survey was sent to every member of staff with working hours that corresponded to at least 20% of a full-time position. The researchers then followed up with qualitative interviews with 26 employees working at different faculties at UiO.

In their talk, Bråten and Mikalsen emphasized how important the “dual perspective” had been in previous efforts to achieve gender equality within academia. The dual perspective emphasized representation, that is the number of women in positions at different levels of academic life, but also highlighted the benefits of gender equality in terms of generating knowledge. By including the experiences and perspectives of women, you would create more and better knowledge diversity.

The analysis of UiO’s action plans showed that this dual perspective became less prominent from the 2000s onwards and was replaced by a management by objectives approach, with an emphasis on numerical representation. Nevertheless, Bråten suggested that the dual perspective seemed to have made a comeback recently, possibly due to a new focus on various forms of diversity, instead of just equality between men and women.

In the presentation of the experiences of employees, Bråten and Mikalsen discussed challenges linked to academic diversity, recruitment, work/life balance, social inclusion at work, as well as discrimination and harassment. Broadly, the report shows that structural and cultural hindrances to diversity at UiO are often seen and treated as individual problems that employees must solve on their own.

Bråten and Mikalsen emphasized that their approach of sending a survey to all members of staff had provided findings about some forms of diversity, mainly relating to the differing experiences of men and women, and Norwegian-born and international employees. However, to gain knowledge about other forms of diversity, relating to for instance social class, disability, or sexuality, they suggested that one would need more targeted research projects.

The need for more research – and concrete measures

After the presentation of the report, Agnete Vabø (OsloMet), Ella Ghosh (the Committee for Gender Balance and Diversity in Research), Julia Orupabo (the Institute for Social Research) and Cecilia Bailliet (the Committee for North-South cooperation, UiO) were given the opportunity to comment on the report’s findings.

These contributions made clear both the importance of the work that Bråten and Mikalsen have done, as well as the need for further research on this topic. Such research might include more circumscribed studies that consider different dimensions of diversity, or that focus on vulnerable groups such as early career researchers, or that look at specific processes, such as recruitment.

Several of these talks also emphasized the need for concrete measures that can put the ideas presented in the report into practice. For instance, on behalf of the Committee for North-South Cooperation at UiO, Bailliet suggested that UiO could begin to mark the International Day for the Elimination of Racial Discrimination on March 21, in the same way it marks International Women’s Day on March 8.

In the closing discussion, when the audience was given the opportunity to comment and ask questions, the researchers behind the report pointed to the need to discuss further what discrimination is and what it feels like, but also highlighted the importance of discussing how UiO defines academic excellence. As the report demonstrates, diversity in academia is not just a question of representation in specific positions, but also concerns knowledge production itself.