Seminar: The public committee on men and equality meets the research community

On November 1, the Centre for Gender Research (STK) held a seminar with the aim of starting a conversation between the new public committee on men and gender equality, and researchers on men and masculinities. 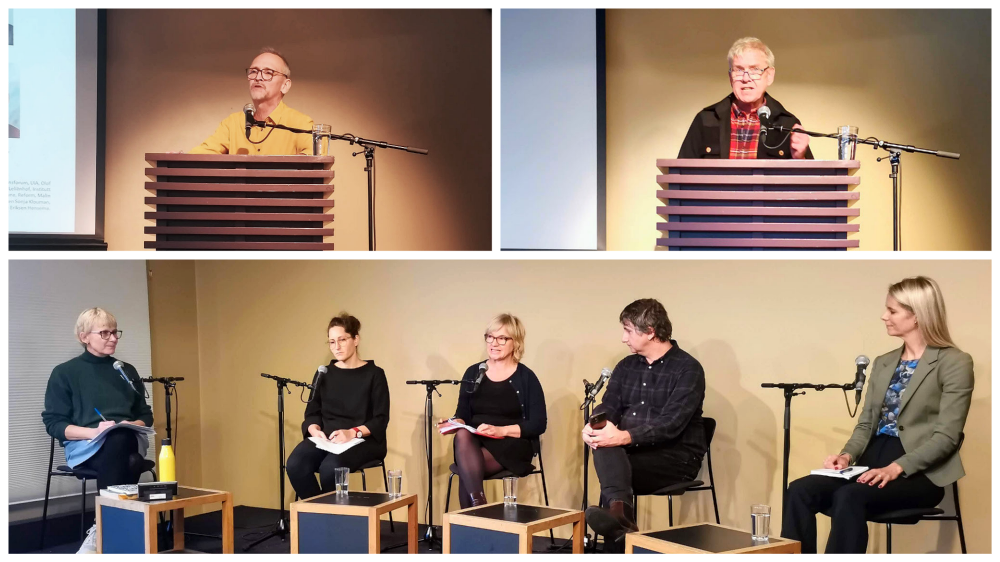 The public committee on men and gender equality – “Mannsutvalget” – has been given a broad mandate, which includes family, education, working life, health, violence and sexual harassment, integration, and old age. The committee will provide an overview of the current challenges to equality for men and boys in Norway and suggest concrete measures that will contribute to a more gender equal society. The aim of the STK seminar was to highlight the committee’s priorities, and to discuss the role that research can play in the committee’s work.

After a brief introduction from the Director of the Centre for Gender Research Inger Skjelsbæk, committee leader Claus Jervell provided some insights into the committee’s goals and their progress so far. Jervell underscored that the committee’s diverse composition was a strength. At the same time, this means that they must begin their work by discussing and defining the central terms that they use, so that they can move forward with a shared understanding of what they aim to do.

Jervell stressed the need to challenge the assumption that men who work full time are “winners”, in comparison with the many women who work part-time. If men earn more because they make themselves more available to their employers, then one must also consider the personal cost of this availability, especially when it comes to family and relationships. He also stressed that the committee would pay attention to those who diverge from traditional masculine roles.

Jervell could reveal that the committee has already started prioritizing which aspects of their broad mandate they will devote the most attention to. The short time frame they have available means that they will have to make difficult choices.

The second presentation of the day came from Øystein Gullvåg Holter, professor emeritus at STK, who carried out research on behalf of the last public committee on challenges to equality faced by men, “Mannsrolleutvalget” (1986-1991). Based on this experience, he advised the new committee to ignore any attempts to ridicule their work, and encouraged them to challenge accepted truths relating to men and masculinities.

Holter pointed out that negative assumptions have often been made about men’s interest in gender equality. For instance, few believed in the 1980s and 90s that men would want to get more involved in care work at home. However, a survey that Holter carried out on behalf of “Mannsrolleutvalget” revealed that many men were actually interested in sharing parental leave. The “father’s quota”, which reserves part of the parental leave period for fathers, was mentioned by both Jervell and Holter as a simple yet transformative policy that came about because of the last public committee on men and equality.

In his talk, Holter also stressed the need to prioritize research on men and masculinities. More funding and a more strategic approach are needed to get a more comprehensive picture of the struggles that men and boys face, he argued.

The presentations by Jervell and Holter were followed by a panel discussion between four researchers on men and masculinities: Liza Reisel (Institute for Social Research), Thomas Walle (Museums of Sogn og Fjordane), Cathrine Thorleifsson (Department of Social Anthropology, UiO and leader of the public committee on extremism) and Helene Aarseth (STK). Beret Bråten (STK) moderated the discussion.

The four panelists had differing perspectives on what the committee should focus on, and their discussion showcased the breadth of research on men and masculinities in Norway. Among the themes discussed were radicalization and digital subcultures, suicide rates among men, and gender divisions in educational choices and working life.

One theme raised by Bråten was the challenges of taking an intersectional approach, as the committee will be doing. How to discuss the particular problems that for instance men with disabilities, queer men, or men of migrant backgrounds might face, without simultaneously categorizing and othering these people? The panel agreed that there are no easy solutions to this problem, but that one goal should be to include more people in “the norm”. Reisel, who is herself a member of the public committee on men and equality, stressed the need to be as inclusive as possible when discussing various themes, instead of having separate discussions about minority groups.