The conditions for homosexuals, bisexuals and transgender people have changed dramatically in Scandinavia over the last 70 years. LGBT people, as we would call them today, were discriminated against, stigmatized and pathologised, but the struggle for recognition and equality over the past several decades has led to levels of cultural change that is unparalleled in historical and global perspectives.

About
By Peter Edelberg,
Associate Professor at the SAXO-Institute - Archaeology, Ethnology, Greek & Latin, History, University of Copenhagen (translated by Reinert Skumsnes).
This text was first published in 2019.

70 years ago, homosexuals could not talk openly about their sexuality; they were subject to discrimination in the Criminal Code and a number of other laws. Yes, in Norway it was even criminal to have sex with someone of the same sex (although this law was largely ineffective in the twentieth century). Even people who considered themselves progressive and tolerant towards homosexuals regarded homosexuality as a terrible disease, that with time eventually could be eradicated. However, they still felt that we should treat the homosexuals kindly, since they were only being themselves. 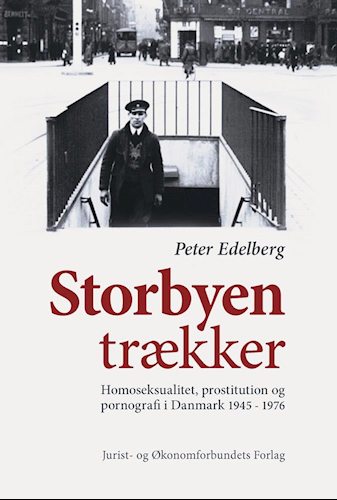 Bisexual people have had a hard time being recognized. They were often regarded as traitors in both camps, and several psychiatrists denied that bisexuality existed at all. It is only in the past decade or so that transgender people have begun to be publicly welcomed, and they have typically not had the opportunity to speak on their own behalf.

Today, homosexuals and to some extent bisexuals are experiencing a recognition and inclusion that no one had dared to hope for just a few decades ago. Legislative discrimination is being systematically removed, and it is not just one or two gay politicians or activists who work for this cause. No, anti-discrimination policies in relation to same-sex sexuality have become mainstream in many parties in Scandinavia. Transgender people are now beginning to remove both stigma and pathology, but still struggle with a paternalistic attitudes within health care systems.

Read the article The Long Sexual Revolution: The Police and the New Gay Man.

How did we get here?

This is a question I and five other researchers from Denmark, Sweden and Norway have set out to explore. We have received financial support from the Swedish Research Council for a 4-year project entitled “En nordisk queer-revolution? Homo- og transaktivisme i Danmark, Norge og Sverige 1948-2018”. We will examine the roots and problems of inclusion policy, and look at how LGBT people have helped shape policy. LGBT policies have always crossed borders. Ideas, organizations, people and political proposals have been flowing back and forth between the Scandinavian countries. That is why we will not set up a competition between the three countries about who came first or who was the best. Instead, we will see how we have inspired each other and collaborated in Scandinavia on LGBT issues. Now that we have succeeded to such an extent that Nordic cooperation and inspiration create inclusion for LGBT people in Scandinavia, this story may help inspire us on how that experience can be used in other areas in the future.

In the research group, we have different views on how to describe the situation of LGBT people in Scandinavia today, and which way forward is the best. We see it as a strength that we can collaborate across countries, across political positions and also across disciplines. The group consists of historians, ethnologists and a social anthropologist. It goes without saying that this article does not speak on behalf of the whole group, but only on my own behalf.

Gay, bi and trans activism in Scandinavia has not always gone hand in hand with the LGBT umbrella concept. It's a pretty new development. Gay activism started at the St. Hans Evening in Denmark 1948, where a small group of homosexuals founded what was soon to become known as Forbundet af 1948 [Federation of 1948]. This association was Danish, but 'local branches' soon appeared in both Norway and Sweden. These broke out rather quickly and made themselves independent. Today, the Danish Association is called LGBT Danmark – Landsforeningen for bøsser, lesbiske, biseksuelle og transpersoner, in Norway FRI – Foreningen for kjønns- og seksualitetsmangfold, and in Sweden RFSL – Riksförbundet för sexuellt likaberättigande. All are continuations of Forbundet af 1948.

Until the 1970s, these associations were more or less the only ones to bring together homosexuals (and to some extent bisexuals), but with the youth rebellion and socialist revival in the times that followed, new associations came with clear socialist slogans. Some of these no longer exist, while others have been swallowed up by, or merged with, the larger associations. A number of new associations have also emerged. Especially since the 1990s, activism has flourished once again, and large organizations have made efforts to include more than just gays and lesbians, but also, for example, bisexuals, transgender people, and intersex people.

Last year, LGBT communities around the world celebrated the 50th anniversary of the riot in Christopher Street in New York on June 28, 1969. What we now know as 'Gay Pride Parades' has actually always been a commemoration or celebration of this particular riot, and was first held in New York in 1970. In 1971, the first 'Christopher Street Liberation Day', as it then was called, was held in Copenhagen by Forbundet af 1948. These parades are, today, among the largest public cultural events in all of the Scandinavian capitals.

The Stonewall riots, as it is also called, refers to three days and nights of street fights between police and gays, lesbians, transvestites and trans people. The police had routinely cleared 'The Stonewall Bar' in Christopher Street in Manhattan. There was nothing surprising about that. Homosexuality was a crime at the time in the United States, and police harassment and violence were the order of the day for sexual and gender minorities.

The surprise, in 1969, was that transvestites, lesbians, gays and others fought back. The cobblestones began to fly through the air, and LGBT people (as they later would be called) were instilled with a fighting spirit and self-respect they had not experienced before. In American LGBT history, 1969 is the year which divides everything into 'before' and 'after'. Nothing remained the same ever again.

The tradition of marking the anniversary of the uprising has spread from New York to the entire world, and unfortunately it has led to the misconception that the Stonewall riots was the defining moment for LGBT people in all countries. A classic American cultural imperialist idea - to put it harshly. And you have to - because in Scandinavia we have an activist history that goes back further than 1969, and this is among other things what we want to show with our research project. The situation was also very different in Scandinavia than in the US in 1969. Police violence against sexual and gender minorities and criminalization of non-heterosexual sex were already history in Sweden and Denmark, and were on the threshold of becoming history in Norway. In Scandinavia, then, the annual Gay Pride Parades were more widely interpreted and branded as a call for and a celebration of visibility, rather than a protest against violent repression.

In Denmark, which I know the best, it was not 1969 that was the breakthrough year for LGBT politics, or gay politics as it was called back then. Debates between politicians, opinion makers and activists had in the 1950s and 1960s changed the view of homosexuality from a 'problem' to be eradicated to a group of people who should be included in society. It will be exciting in my part of the project to examine what the breakdowns are for Sweden and Norway. Either way, we should expect other logic and timelines other than the ones those followed in the United States. The welfare state, the gender equality ideology, and the absence of a markedly conservative Christianity (at least in Denmark - but how about Sweden and especially Norway?) sets a completely different framework for the discussion on LGBT people.

In Scandinavia, we are good at, in a good Protestant spirit, to always criticize ourselves for not being good enough. But it is precisely in the LGBT area that it is worth pausing, to celebrate the developments that we have seen over the past decades. There are both structural and more concrete reasons as to why Scandinavia is a particularly good place to be for LGBT people (but we should not be fooled by the LGBT acronym to believe that all people under this umbrella enjoy equal recognition in society.)

Throughout the twentieth century, the Scandinavian welfare states have freed people from their families and their immediate local environment. It has made it possible to survive even when alone, and created the basis for an individualism that has structurally paved the way for doing gender and sexuality in different ways. Likewise, the strong secularization has allowed for a 'privatization of sexual morality'. So it is not sexual-political activists who have all the credit for improving conditions for LGBT people. This can largely be attributed to development trends that have their roots elsewhere.

History does not develop by itself

But when it is Pride, and we commemorate the Stonewall riots and the fighting spirit it brought with it all over the world, while hopefully not forgetting that Scandinavian activism goes back even further, there is still reason to celebrate the activists. History does not develop by itself. There must be negotiations, that include both give and take. Some have to take unpopular and controversial positions without receiving any thanks for it in their own time. And if it had not been for the activists, the liberalization of sexual morality would probably not have been followed by an environment where one could meet and hang out with other people, who are also different. It had been a cold and sterile liberalization. Not like now, where it is celebrated by happy people with glitter, brilliance and festive mood.