Sunniva Árja Tobiasen has researched a little explored topic - how we can understand intimacy, experiences of desire and attraction, partner relationships and sexual practices, when there is not necessarily a sexualized dimension for the person(s) involved. She argues that the concept of asexuality has an unfulfilled potential.

About
By Sunniva Árja Tobiasen, Research Assistent at the Centre for Gender Research, UiO (translated by Reinert Skumsnes).
This text was first published in 2020.

The first known empirical study on asexuality was published by psychologist Anthony Bogaert (2004). This seminal study contributed to bringing an academic focus to asexuality as an identity. The definition of asexuality, put forward by Bogaert, describes a person that does not experience sexual attraction towards anyone, regardless of gender. Bogaert (2006) argues that asexuality is defined as a lifelong phenomenon, and that experiencing no sexual attraction does not cause the asexual any distress.

Gender researcher Ela Przybylo (2019) describes two different directions of research on asexuality: a clinical one that focuses on how to quantify and measure asexuality, seesawing between pathologizing and legitimizing asexual communities. The second is feminist and queer research, which explores the political and intersectional potential of asexuality, and entails challenging a limiting definition of asexuality. Bogaert is an example of a clinical approach, and one challenge with his definition is that there is little room for nuance in terms of experiences of asexuality. For instance, within asexual communities it can be meaningful to describe oneself as being on an asexual spectrum, where experiences of sexual attraction are present to such a small degree that it doesn’t make sense for the individual to define themselves as anything other than asexual.

CJ DeLuzio Chasin (2013) is a Ph.D. Candidate in Applied Social Psychology and represent a feminist and queer approach. Chasin explores what they refer to as the radical potential of asexuality and argues that academia contributes to asexuality being positioned within essentialist identity discourses by defining it as a lifelong absence of sexual attraction. Not everyone who experience little to no sexual attraction define themselves as asexual, nor do they necessarily experience any kind of distress. By drawing a line between asexual experiences that on the one hand cause no distress, and on the other hand a potential pathologizing of the same experiences, can make it more challenging to explore one's own sexuality and asexuality. 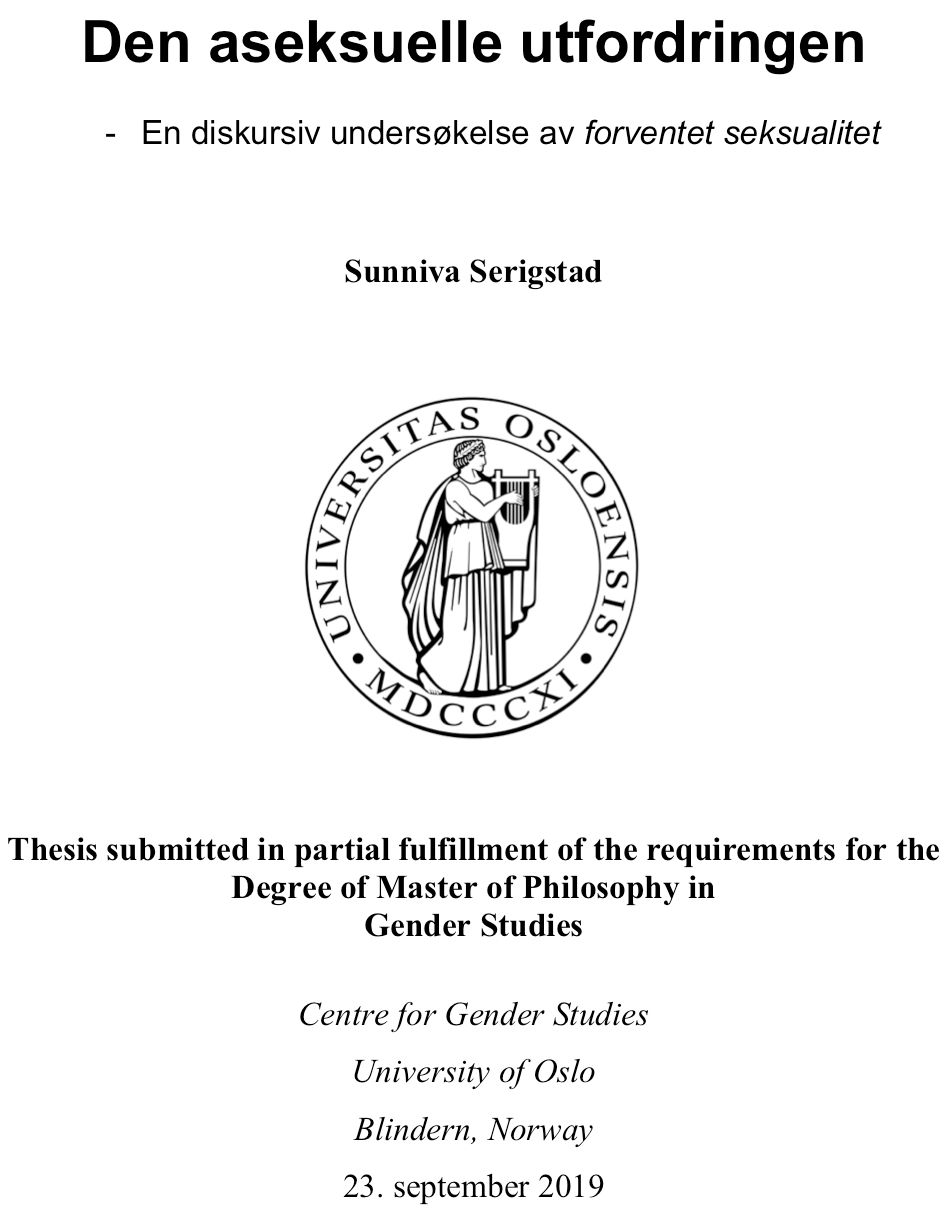 What does it mean, and what can the consequences be, when asexuality as a sexual identity is based on something absent, something not experienced? In a study of prejudice towards asexuality, MacInnis og Hodson (2012) find that asexuals are more often seen as less human compared to other categories of sexual identity. This can be viewed as an example of the importance we place on sexuality in notions of what it means to be human. Compulsory sexuality is a concept that describes a system of often undisputed sexual assumptions. This includes the notion that all humans are sexual by nature, with similar experiences of desire and attraction. The concept also describes the social norms and practises that marginalizes different forms of asexuality and asexual experiences, such as little to no experience of sexual desire or sexual attraction. But a sexualized understanding of desire, intimacy and attraction can limit how we interpret and understand the experiences these concepts are meant to describe. This is because someone who identifies as asexual can fall in love, wish to be in a romantic relationship and engage in sexual activities with or without a partner.

Chasin (2011) describe research on sexuality as being a theoretical house, and when faced with something that is traditionally viewed as marginal or special, an annex to the house is built instead of taking a look at the fundamental construction of the house. This metaphor is based on the work of psychologist Laura Brown (1989) who put forward the challenge to turn this around and instead emphasize the experiences traditionally viewed as marginal and thereby, in a sense, make the house accommodate everyone. Asexuality can bring nuance to our perspectives on sexuality. For instance, there is not necessarily a correlation between physical responses and subjective experiences of desire for those involved in sexual activities. The expectation of correlation between physical responses and subjective experiences of desire have two specific consequences: If a person has a physical response in a situation where they do not want to engage in sexual activities, they risk being sexualized against their will. This is one reason why explicit consent is so important: a person’s physical responses are no guarantee that they actually want to engage in any sexual activities.

The other consequence is that expectations of correlation can contribute to desexualizing people who have less or no physical response. Gender researcher Eunjung Kim (2011) nuances the relationship between asexuality and disability. Desexualisation is understood here as a process that separates sexuality from disabled bodies, where a person’s sexual identity is not recognized, and there is not necessarily any room to explore whether someone actually wants to identify as asexual. Kim suggests that assumed asexuality is not the result of disability, but rather the strong connection between sexuality and being ablebodied. But, as Kim points out, if asexuality is seen as something to combat, we run the risk of it becoming a mechanism to normalise at the expense of the disabled people that actually do identify as asexual. Kim suggest that we challenge the desexualisation of disabled people, without making asexual identity and experiences the opponent, but instead focus on the strong connection between sexuality and being ablebodied.

An asexual potential in development

Compulsory sexuality also describes how social norms can compel people to experience themselves as desiring subjects, take up sexual identities and engage in sexual activities. Anthropologist David Valentine (2003) suggest that the use of identity categories, established in a binary understanding of sexual orientation and gender, reproduces a system where experiences of desire that cross or disrupt those categories are rendered incomprehensible. Asexuality is a developing concept and identity category. In addition to being a sexual identity, asexuality challenges the presumed sexualized corralations between subjective experiences of desire, bodily responses and participation in sexual activity. At the same time, a definition of asexuality that does not have room for nuances and diversity can also reinforce expectations that the only options are asexuality or pathologizing. Asexuality may benefit from being dynamic, as on a spectrum. And it may be fruitful to both talk and write about asexual experiences beyond the asexual identity. Chasin (2013) points out that it is generally not considered acceptable to offer treatment to people with same-sex attraction. So where to draw the line when, if at all, it shall be encouraged to offer treatment for people with asexual desires? My argument is that we need to make it safer to explore both sexuality and asexuality, regardless of sexual identity. The concept of asexuality offers a way to challenge a sexualized frame of understanding when faced with different ways of experiencing desire, attraction and intimacy.