Patterns of change and disclosures of difference. Family and gender in New Kingdom Egypt: titles of non-royal women (completed)

Skumsnes’ dissertation explores the monumental remains and the non-literary ostraca and papyri as different layers of situated material-discursive practices. The records are approached both in terms of patterns of change and disclosures of difference, while trying to make sense of what often comes down as contradictory information about family and gender in New Kingdom Egypt (1539-1077 BCE). The aim has been to disclose both sameness and difference in the records. 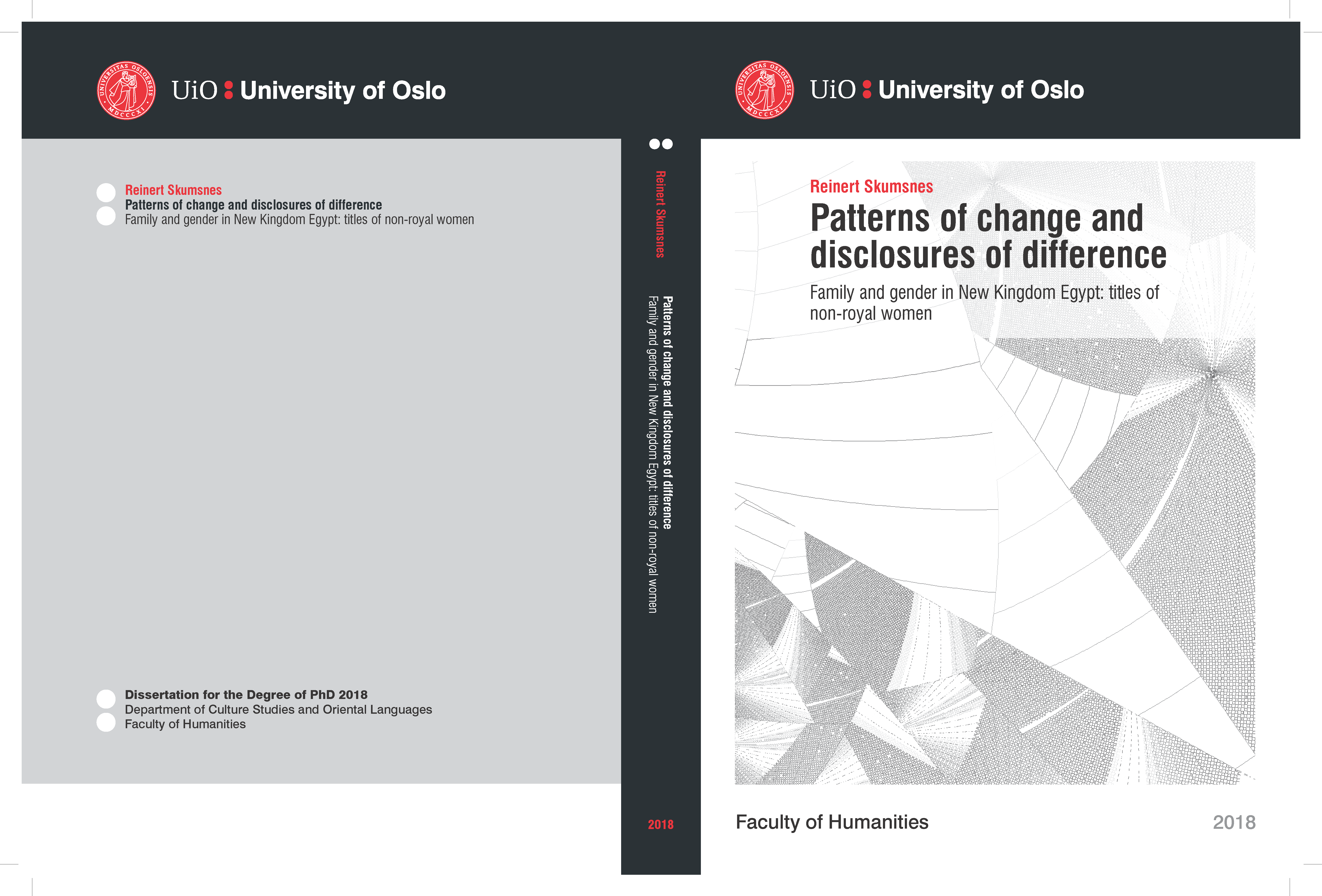 In terms of patterns of change, women seem to gradually become more visible. More specifically, the non-royal female titular imply that there were several temporal nexuses of female visibility through the New Kingdom, suggesting that the position of women waxed and waned accordingly: the change in reference to ‘his wife’ from Hmt.f to snt.f in the monumental remains imply that the wife became increasingly recognized as ‘his sister’, alter ego and co-occupant of his tomb; and the increasing popularity of titles such as ‘woman of the city’ and ‘musician of Amen’ (or other gods) imply a change in focus from the domestic sphere to city/village and temple.

Skumsnes' main argument is, however, that any general claim about the relative position of men and women within society will fail to describe what was reality. In general, the monumental remains give a hyper-gendered account, while the non-literary ostraca and papyri are more ephemeral and less gender focused. Class and status stand out as equally, if not more important than gender. More specifically, there are variations between, even within, single records. Definitions of gender must therefore be understood as disclosures, which depend on a number of factors, such as the material, genre, purpose and context of the specific record; the selection of records; as well as the questions and perspectives of the interpreter.

The records seem to be more coherent in terms of what constituted the family. The dissertation demonstrates that, in terms of reaching the afterlife, multiple strategies coexisted: in addition to the traditional husband-wife duality, there is also strong symbolism in father-son, father-daughter, mother-son and mother-daughter relationships. Being family, moreover, was not only about biology, or being next of kin, but was more importantly about who actually (and symbolically) acted as family. Skumsnes claims that reciprocity and mutual dependency, through the correlation of support, burial and inheritance, was the very glue that tied families together. He calls this family contracts: through these contracts, individuals negotiated their position in society through their relations/encounters with others, both living and dead, human and non-human.

The project is based at the Centre for Gender Research (STK) and the Department of Culture Studies and Oriental Languages (IKOS) at the University of Oslo, but also include a research stay at the Institute of Oriental Studies, University of Chicago.