The three-year tenure as NORA editors is coming to an end, for Anka Ryall, Beatrice Halsaa and the rest of the editorial team, with a special issue under the heading Gender and Generation in China today by guest-editor Harriet Bjerrum Nielsen. 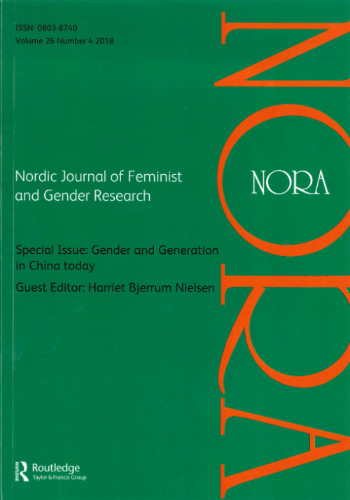 Our three-year tenure as NORA editors is coming to an end with this issue. Since the autumn of 2015 we have processed 250 contributions and published 48 peer-reviewed articles, 12 position papers, 19 book reviews, and two review essays. Unsurprisingly, most of the peer-reviewed articles originate in the Nordic countries—13 are from Sweden, 11 from Norway, 9 from Finland, 8 from Denmark, and 4 from Iceland. Together they provide a measure of Nordic feminist and gender research today, and we feel privileged to have participated in making this research both visible and available internationally.

Before leaving the journal to the new Finnish editorial team, we would like to use this opportunity to take stock. Did we manage to broaden the disciplinary scope of the journal, as we had hoped, and did contributors take account of our expressed ambition to make research accessible to a diverse academic readership? Although contributions from the social sciences still dominate, the first question may be answered in the positive. Fourteen of the 48 peer-reviewed articles we have published can be categorized as humanist, and most of them have dealt in one way or another with literature or visual media. Six of the articles on literature were published in our special issue on “Gender in Literary Exchange” (issue 4, 2017), a sign that such promotional efforts may pay off. In addition, we were pleased to publish articles by researchers in interdisciplinary fields such as gender studies and indigenous studies. Yet articles written by humanities scholars constitute only about a quarter of the published contributions. Moreover, although we regarded the publication (in issue 2, 2017) of an article from the health and caring sciences as a milestone, it was not followed by others. We would also have welcomed more contributions from history and legal studies.

To answer to the second question is more difficult. NORA is a multi-disciplinary journal, but—with some laudable exceptions—we do not think the contributions communicate well enough beyond the author’s (or authors’) disciplines. Perhaps that is due to the exigencies of present-day neoliberal academia, in which merit is assessed on the basis of specialized disciplinary criteria rather than cross-disciplinary readability. In this highly competitive environment, it may be difficult, if not impossible—even for feminist scholars—to think and write outside of disciplinary boxes. If so, it is a development we can only regret.

The emergence of this special issue of NORA is indebted to many years of collaboration between Chinese and Nordic gender scholars. Since China opened up its borders to foreigners in the late 1970s, Western gender researchers have studied the vast political and cultural processes of change in this huge country, which today comprises a fifth of the world’s population, is the second largest economy in the world, and has recently surpassed the USA in regard to the annual number of scientific publications. China studies are also a vital part of Nordic gender research, which might not be so well known to Nordic gender scholars in general. A Sino-Nordic Gender Studies Network was established in 2002 on the initiative of the Danish-based China scholars Cecilia Milwertz and Qi Wang. The aim of the network was to encourage a dialogue between gender researchers of the two regions (see http://nias.ku.dk/fudan/sino-nordic-gender-studies-network). Triennial conferences have been organized since 2002, alternately in China and in the three Scandinavian countries. The latest one took place at the University of Oslo in August 2017 (see https://www.stk.uio.no/english/research/news-and-events/events/conferences/2017/age-agency-ambiguity.html). The theme chosen for this 6th conference of the network was Gender and generation in times of change—in China and in the Nordic countries. This special issue of NORA arises from this event.

The idea behind the conference theme was to focus on how gender and generation are affected during times of rapid change and what differences and similarities one might see in so different regions as China and the Nordic countries. Processes of industrialization, urbanization, deregulation, migration, and globalization have a profound transformatory effect on gender and generational relations all over the world. It relates to gender and generational aspects of family life, family–work relations, ageing societies, the situation of the younger generations, popularization of higher education, the expanding middle class and emerging precariat, the environment and sustainable development, and inequalities between different groups and classes. In spite of the huge differences between the Nordic countries and China in regard to size, culture, history, and political regimes, there might also be common features to these processes and the tensions they create, especially between genders and generations. Furthermore, China and the Nordic countries share some similarities, such as, for instance, a strong emphasis on the state’s role with regard to educating and socializing youth, and promoting gender equality, for instance through co-operation with women’s organisations. A comparative view on conflicts, negotiations, and changing relations between genders and generations may thus illuminate both general and specific traits of processes of change as well as what might be entailed in the concepts of modernization and crisis.

Increasing Employment Precariousness in Post-socialist China: Everyone Equal in a World of Uncertainty?

Chinese Fathers in the Twentieth Century: Changing Roles as Parents and as Men