The latest issue of Politics, Religion & Ideology focuses on gender and the far right, and has been edited by Inger Skjelsbæk (STK) and Katrine Fangen (ISS, UiO). 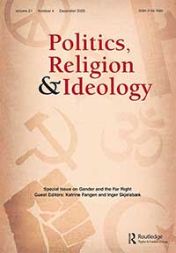 The upsurge of studies on gender and the far right has come as a response to several factors. First, while there have been female leaders in far-right political parties for some time in Europe, and these number have increased. As a result, the gendered dynamics of leadership and power structures become more visible, spurring a renewed focus on gender. Second, far-right mobilization is often anchored in an opposition to pro-gender norms and support for traditional gender roles, a phenomenon that has become more accentuated in recent years. The emergence and rhetorical use of the term ‘gender ideologies’ functions as a unifying element for particular forms of extremist mobilization, serving to unite them against other forms of more progressive, and global, gendered changes characterized by gender equality and tolerance for sexual diversity.